We use Penetration Testing techniques to continuously assess your external risk profile, alerting you to changes on your attack surface or the threat landscape. We apply human intelligence to the complex aspects of the task and develop application-specific automation for the repetitive parts. This allows us to test far more frequently and much more efficiently when compared to traditional penetration testing.

State of the Union

A dashboard shows the current security stance of your organisation, including outstanding issues as well as the on-going security testing work conducted.

New systems are highlighted within the dashboard to ensure they're not missed from the testing scope.

High risk issues cause vulnerability alerts so you don't miss critical vulnerabilities or weaknesses. These can be configured to your desired threshold.

Akimbo Core offers "Always-on" Security Testing. This is a modern approach to cybersecurity that offers the benefits of penetration testing but is more effective as it is constantly active.

We provide information about your security stance through an online platform, available 24/7, that allows you to view the security testing that's taking place and to see your organisation's current level of risk. 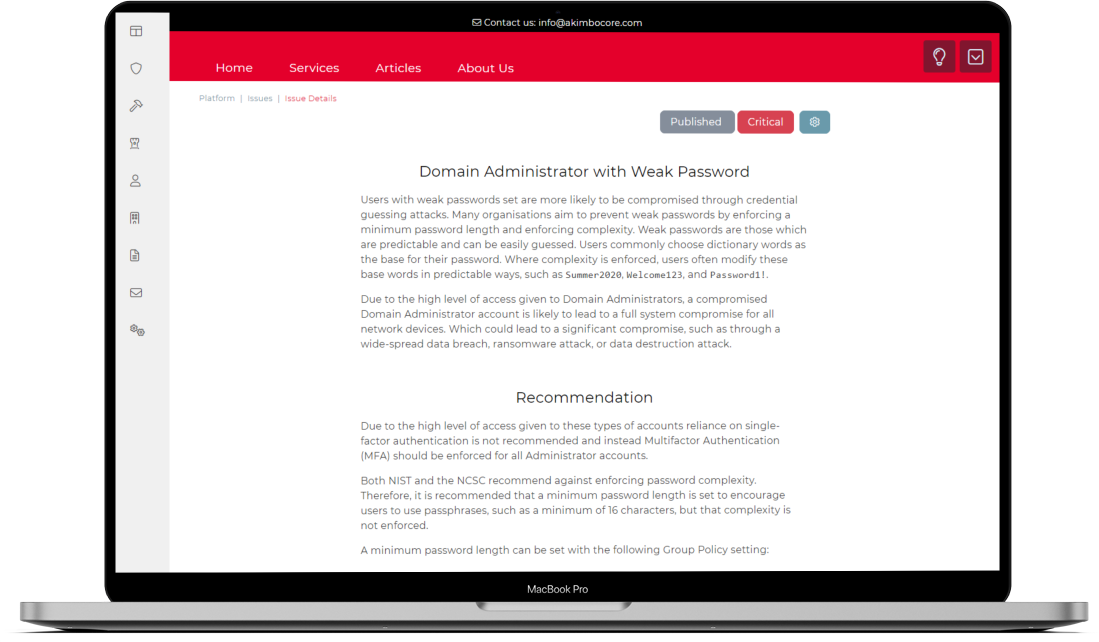 The Problem with Penetration Testing

Traditional cybersecurity testing approaches such as penetration testing are often only conducted annually - but, that is not in-line with the way that systems and applications are developed. Regular changes and updates can introduce risks faster than those methods can detect.

Modern organisations are constantly making small changes and improvements to their systems. Keeping everything up-to-date and locked down is a fundamental pert of cybersecurity, but issues may be missed and risk may unintentionally introduced to your systems.

To ensure that these problems can be found and fixed quickly, it's critical that your security stance is constantly tested.

Want to get in touch with the team? Drop us an email: